Today, more than ever before, people are in a hurry and are aiming to complete specific errands or tasks as quickly as possible so that they can achieve any goal that they have in mind. Ultimately, time has become one of the most valuable things in the eyes and minds of many who are constantly doing something of interest or have a lot of work.

The Real Estate industry, as well as the blockchain space, have a few things in common which could help them accelerate in terms of adoption, as well as the speed at which investments occur.

One of the key issues currently limiting financial institutions is the fact that not everything is automated. Real people, or in other words, workers, still need to verify specific things, sign transactions, and transfer currencies from one part of the world to another can be both difficult as well as time-consuming.

Furthermore, banks do not work 24/7/365. Banks will typically not work during weekends, or on Sundays, and they will typically work within a predefined time frame. While electronic payment services might always be online, there are still real-world tasks that need to be completed by real people. Let’s go over how you can begin investing in real estate blockchain by leveraging the technology, after which you can learn how to buy digital real estate.

Blockchain technology can take this to the next level, and we are going to go over exactly how.

Blockchain Throughput and its Role

The main difficulty that blockchains have aimed to solve throughout the past few years has to do with three specific challenges. The blockchain trilemma is a reference to a widely held belief that decentralized networks can only provide two out of three benefits at any given time, and these include:

In the context of blockchain technology and this blockchain trilemma, we need to look at scalability. To achieve scalability, a blockchain needs to be able to handle high throughput.

Transactions per second (TPS) is a reference to the overall number of transactions that a network is capable of processing within each second that passes.

The average TPS of the Bitcoin (BTC) blockchain, for example, is about 5 TPS. However, this can vary on network congestion. 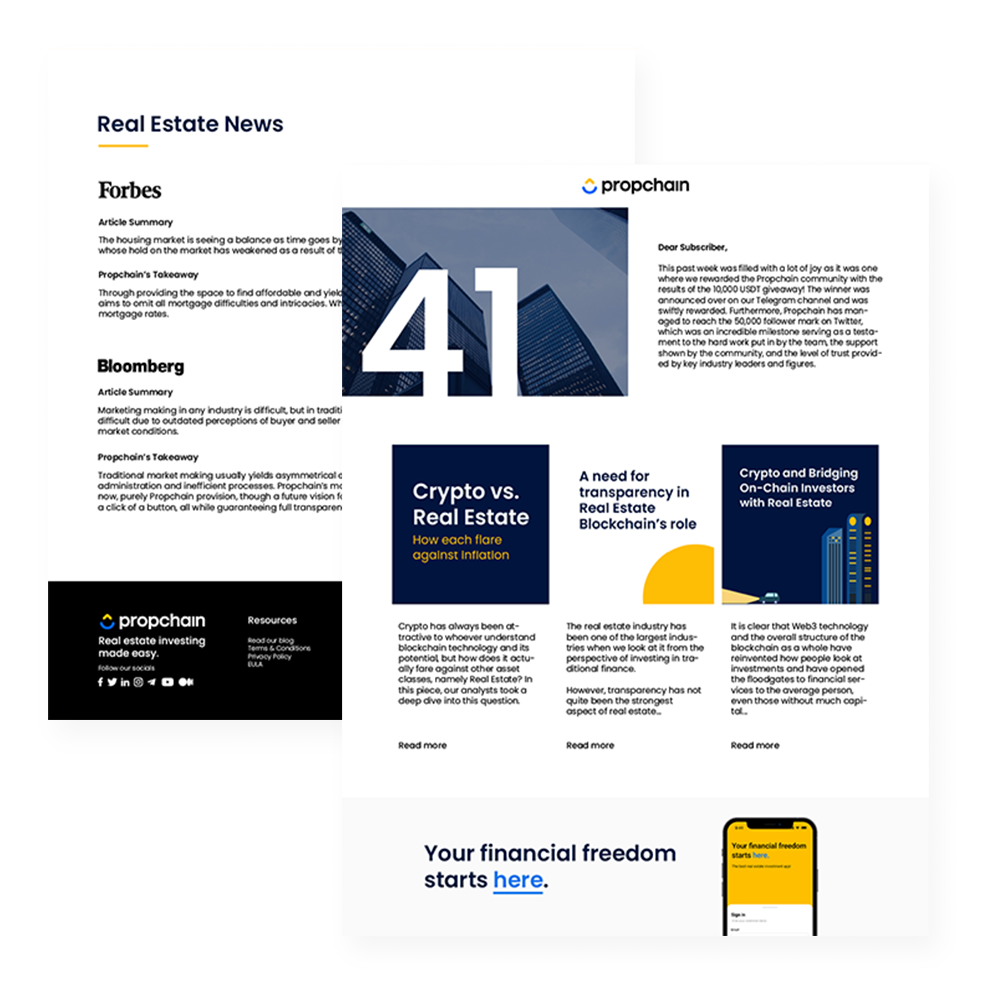 Stay informed about what’s going on in Real Estate.

Subscribe to be the first to hear about the newest profitable real estate investment opportunities. With Propchain’s newsletters, you’ll learn the critical investing takeaways from essential news items, and the macro trends that underpin them. We keep it simple and give you the TLDR each time.

The development of additional blockchains has aimed to boost the transaction rate of blockchain.

As a point of comparison, payment services which are centralized databases such as VISA can handle between 1,500 to 2,000 transactions per second.

As a means of replacing centralized solutions and disrupting them, many blockchain networks have aimed to create a solution that can deliver high TPS.

Cardano (ADA) also supports a speed of 250 TPS. There are solutions such as Bitgert Chain (BRISE) that can support up to 100,000 TPS.

In any case, it is clear that most blockchains have caught up and even surpassed VISA in terms of throughput, which spells good news for the future of blockchain technology as well as Real Estate.

Join this revolution today by signing up through propchain.com. This is one you do not want to regret missing out on.

Be the first to test and use our desktop version of the Propchain platform by joining our waitlist!

*don’t worry we hate spam just as much as you do.

Thank you for your interest in this listing! Please fill in the information and we’ll get back to you shortly.