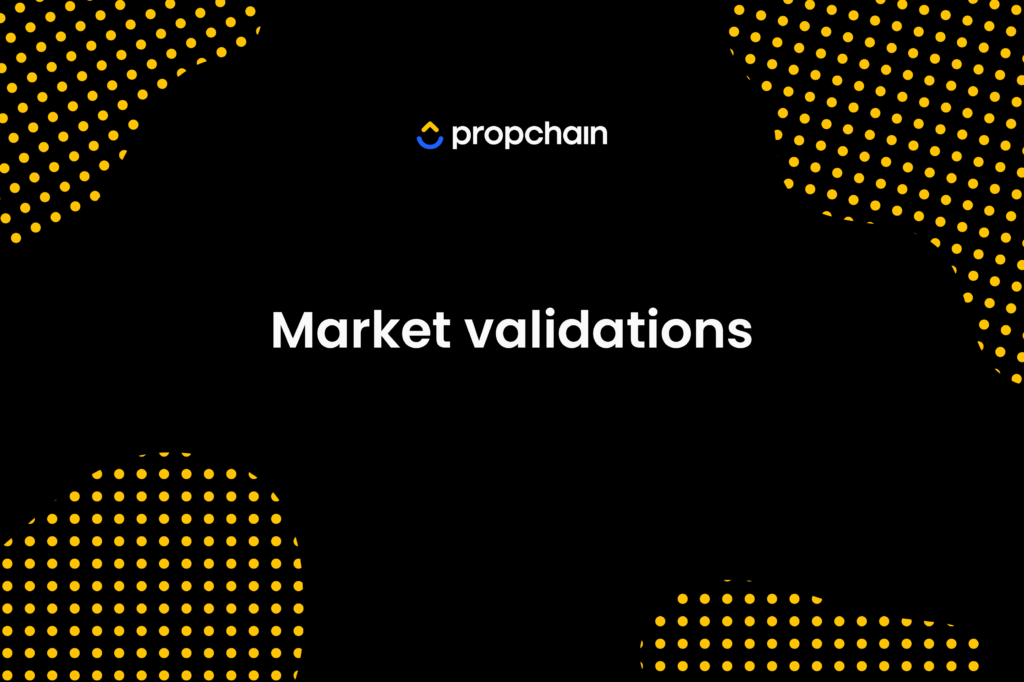 The ins and outs of starting up in any industry is always accompanied with a number of obstacles and challenges that a company must face and overcome should they become a successful and leading entity in their field. One of the main challenges companies face is finding out whether their business is indeed inline with the progression and speed of development of their desired industry and market(s). Countless businesses shut down or default soon after their initiation due to not having a product or service offering that is consistent with the reality of their corporate context, whether that is due to having an outdated offering, or an offering that is ahead of its time.

Due to this critical contingency’s heavy ramifications on a business’ lifetime, PropChain undoubtedly carried out hefty market and technological research initiatives prior to starting up, until a point of complete consensus was reached when it was found that the market and industry PropChain was aiming to provide for was not only in need of a similar prospect, but had also already started working towards achieving it.

The current real estate market is quite an influential and large one on its own, standing at a market capitalisation of a little over $326 trillion. A staggering figure already, but one that is sure to grow at an exponential rate after being integrated into blockchain technology in the coming years. An estimate by the WEF states that the current STOs market which has a market capitalisation of $1 trillion, could grow to have one as high as $24 trillion by 2027 — which further proves the long-term viability of not only the industry but the technology that will carry it through the next decades. These increases in market capitalisation will not only be caused by common economic factors such as inflation, but mainly through an increase in sales volume and frequency. In fact, it is currently estimated that a transfer of ownership of a real estate property can take as much as 8-weeks to close, whereas through asset fractional ownership infrastructure and blockchain technology, this process can be initiated and finalised in a little under 10-minutes’ time.

The above figures become far less surprising when we find out which world establishments and entities contribute and engage in asset tokenisation. These entities come in all different legal and structural forms — from private bodies to public ones in the financial sector. As stated before, nations such as the UAE are beginning to embrace this new approach to asset ownership, but the former is not by any means the only world governing body involved in this. Another notable name is China, as the Bank Of China has been involved in tokenisation for quite some time, as they begin to embrace this innovative financial transition. Other bodies include Santander Group & investment banking giant J.P. Morgan.

Despite its sheer size and prominence, the real estate market has always been accompanied by numerous inconveniences that have made it increasingly difficult to penetrate and utilize to its full potential. These include, the difficulty with liquidating one’s assets in a fast paced financial world that requires liquid funds on a daily basis, the sheer inefficiency of administrative bodies that oversee real estate transactions and transfers of ownership, which have been found to take an average of 4-months to finalise one property sale, and many more problems related to financial entry barriers, lack of investment portfolio diversification and hidden fees that further inflate prices.

These issues create countless market gaps that are difficult to fill without significant technological advancements not only within the industry but also in an array of administrative activities that accompany the transactions within the industry. And, with the rise of blockchain technology and the continued success of NFT marketplaces such as OpenSea, PropChain believes that scaling such technology to accommodate for other prominent assets such as estate properties is the way forward. Not only is it consistent with the speed that our world is advancing at in the fields of finance, technology and legality, but it is also theoretically a feasible alternative with regards to its development. For this, PropChain is building a market satisfying infrastructure that takes charge of fractionalising real estate assets, carrying out all necessary due diligence, providing a consistent supply of developments

This market is undoubtedly one with significant potential as discussed above, both financially and technologically. PropChain thus not only aims to be an early mover in said market, but also a major protagonist in facilitating real estate investment and contributing to this exciting technological boom

Be the first to test and use our desktop version of the PropChain platform by joining our waitlist!

*don’t worry we hate spam just as much as you do.

Thank you for your interest in this listing! Please fill in the information and we’ll get back to you shortly.